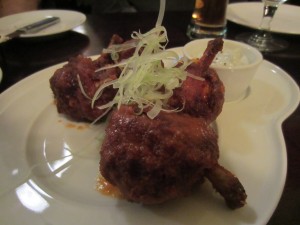 At this Tribeca staple, the Georges Forgeois Group bring you what most New Yorker’s define as a French Brasserie. A bistro by all definitions, Cercle Rouge is decorated with French pop culture including several movie posters. Expect white table cloths, wood tables and chairs, a mostly European staff and a very busy brunch. On their menu you’ll expect to find Frenchie faves like Steak Frites, Duck L’Orange, Escargots & Moules. Everything is prepared with care and a tradition for French cooking. The big surprise here? Google search your heart out and you’ll find nearly every review of Cercle Rouge mentions the Cercle Rouge Wings, a special house preparation of Chicken Wings.

These wings, one of the few items on the printed menu in all red text (as opposed to the black text of the of the rest of the menu) are a favorite item to many of it’s customers. They’re also the reason why the Wing-Off crew put this restaurant on our radar. The Chef deconstructs a standard wing, leaving only one bone and recreates a Chicken Wing by pushing the meat together into a ball. It’s deep fried, giving it a crispy outside and then finalized in their Sweet and Spicy Wing Sauce. The final product is reminiscent of  Chicken Lollipop more so than the traditional Buffalo Wing.

In a word, unique and in another, delicious. You can literally and figuratively suck the entire thing right off the bone. The hype is most certainly warranted for this crunchy, meaty, savory Wing. If you’re a Bleu Cheese fan, you’re in luck, Cercle Rouge uses real Blue Cheese to make a very creamy and thick dipping sauce full of real chunks of Bleu Cheese. Two things to note: 1. We ordered a 2nd plate because 2 wings per person was not enough & the 2nd batch were not as good as the first. They had more dark meat & fat in them than the first batch. 1. These wings come 4 per dish at a price of $12 making each wing a hefty $3 a piece. 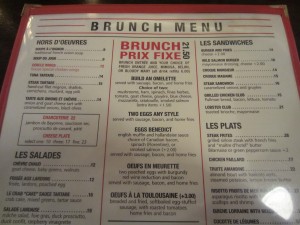 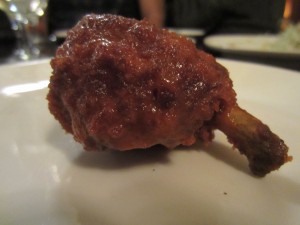 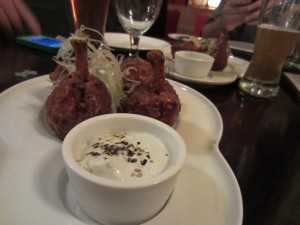 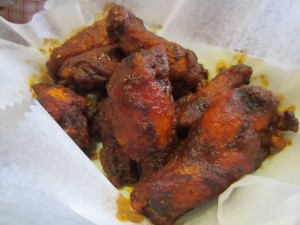 Rub BBQ, more formally known as “Righteous Urban Barbecue,” was started in 2005 by Andrew Fischel, a student and partner with award winning BBQ master Paul Kirk. Located in NYC’s Chelsea neighborhood, this restaurant serves all kinds of BBQ specialties and comfort foods. From Ribs to Pulled Pork to Chicken to Brisket to Sausage to Frito Pie and even Roast Duck. One of Rub BBQ’s most popular specialties is their Monday Night Secret Burger. It’s one of the most heralded, talked about and anticipated Burgers in all the Burgerverse and it’s only available on Monday nights. Every Monday, beginning at 6 pm, Rub BBQ starts serving them but doesn’t put them on the menu. You need to know to ask and while you’re at it, there is one more thing you should know. There is always more than 1 burger. Each week Rub offers up THE “Rub Burger” which is Burger Conquest fave but they also put forth a different specialty each week. It is not to be missed, much like their Smoked Pastrami which if you’re asking me, is the most delicious piece of Meat on the planet.

But we aren’t here to talk Pastrami!

The Rub BBQ Chicken Wing is not the skimpy, deep-fried, Buffalo sauce doused Wing you find at every sports bar. This Wing is treated the same way as the rest of the fine Meats at Rub, as a BBQ item. The Wings are smoked and then slathered in Chef Scott Smith’s Chicken BBQ sauce. The final product comes out with a mix of Sweet, Tangy, Smokey and Pepper flavors that make it one of the most delicious and unique Wings in NYC. It’s a customer favorite and once you have some, you’ll agree too. 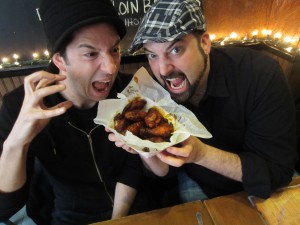 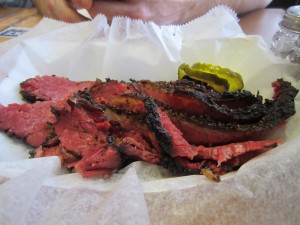 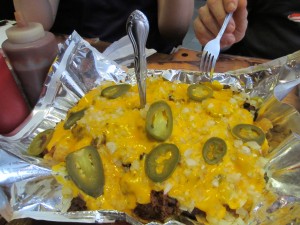 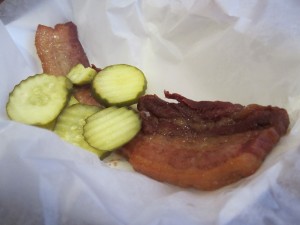 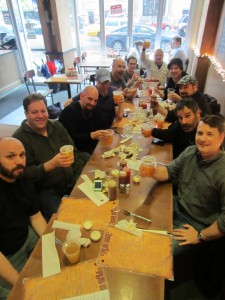 WING -OFF 18 OFFICIAL WINNER – CERCLE ROUGE!
In 5 years of NYC Wing – Offs, never have I seen the crew so divided. Normally everyone agrees that both Wings were great, which was certainly the case here today. But then the standard result comes down to a difficult but unanimous decision. Not the case at Wing-Off 18! The vote was nearly split down the middle with Cercle Rouge beating Rub BBQ for the final decision. Just to clarify, voting is based upon the Wing and the Wing only. Things like service, price, atmosphere, other menu items, drink selection, etc have no affect on the voting. Cercle Rouge is not the normal kind of restaurant we would send a typical Wing fan, whereas Rub BBQ would closer fit that bill, in this competition their Wing won out. So much debate was kicked up in fact while at Rub BBQ, that we ended up ordering another Frito Pie and several more Beers while debating!