BAR-COASTAL vs. BROTHER JIMMY’S BBQ vs. THE BACK PAGE SPORTS BAR
-Upper East Side Edition

WING-OFF is a charity event to benefit cancer research! All participants are required to donate money to join in Wing-Off. All donations from this event will be going to Sean McGrath Fund. “The Sean McGrath Fund was created in memory of the late musician (Saves The Day, Mouthpiece, Hands Tied), whose two-year battle with cancer ended in 2004. Through the Princeton Area Community Foundation, our Fund’s mission is to financially assist a wide variety of causes reflecting Sean’s life, relating to music, compassion, and health issues including cancer.”

On this event in particular, the gentlemen of Wing-Off raised $130 in donation. If you would like to donate you can do so directly or through Burger Conquest by click the link on the right side bar.

And now, the WINGS! 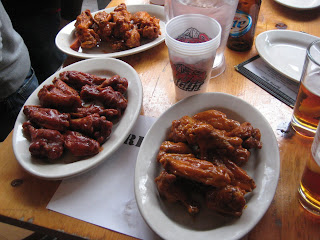 Bar-Coastal is one of the original Atomic Wings licensees in NYC.Atomic Wings is a chain located in NYC that imports their chicken directly from Buffalo, NY and claims to serve them in the authentic buffalo wing way.Most of them are stand alone, but Bar-Coastal, much like Down the Hatch (inspiration for the first ever Wing-Off), serves them in their bar.

Jason (the man behind Bar-Coastal) and his staff, definitely get an A+ for treatment as they rolled out the red hot carpet for the Wing-Off crew. Holding us a few private tables, made it a lot easier for us to sample different wings, compare notes amongst ourselves, talk with Jason and in general, have a great time all while sampling a great beer menu.

Serving up Medium, Nuclear, Jerk BBQ and the off-menu special, Kerry’s Way (a mix of honey mustard, bbq and traditional buffalo sauces). All of the wings were cooked perfectly; Nuclear (Hot) and crispy. Kerry’s Way had a nice spicy meets sweet mix. The crowd fave were the Jerk BBQ, which had a smoked black pepper accent, but for official Wing-Off blessings, we only judge on Hot and Medium. Both of which were hot, full of flavor, meaty, juicy, buttery, crispy and made just the way we like them. 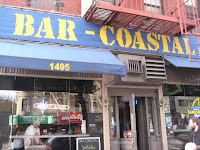 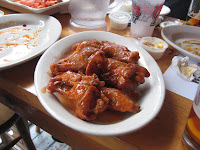 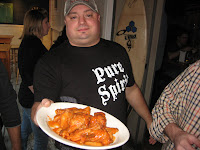 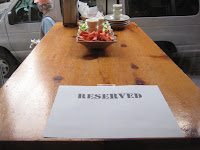 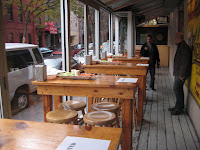 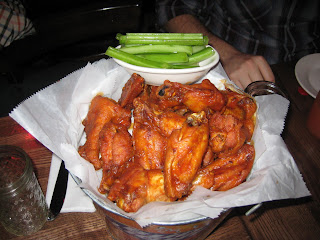 Up next, the NYC based “Southern Style” BBQ restaurant chain, Brother Jimmy’s BBQ. Claiming themselves as the “home away from home for the A.C.C. alumni.” The A.C.C. is a Division 1 conference in the NCAA. Offering several different locations, each with different themes, we hit the original on 2nd Ave. Brother Jimmy’s specializes in BBQ, especially Carolina style but also serves up some well known hot wings.

Our friendly and upbeat server Brooke, showed us to 3 tables in the back (always good to move us away from the others!) and promptly took our wing and beer order. Their wings come one of 2 ways, Chipotle or Buffalo (medium) and we ordered 1 bucket of the latter for each table. For the sauce oriented, BJ’s offers 6 additional sauces that come on the table, each in their own bottle. Be careful picking them up as they are not capped and will easily squirt “Blazin'” sauce 2 feet in the air before landing on what was a clean pair of jeans.

The wings came quickly and accompanied by a large bowl of blue cheese, a “vat” if you will. Any real wing lover, loves to dip and there is nothing more frustrating than a tiny receptacle of blue cheese that runs dry faster than a rain puddle in a desert and acts like an awkward first date, only accepting the “tip.”

The wings were crispy, served hot, and had a decent flavor. Spice-wise, these wings don’t have much to offer. There is some nice flavor but “hot” these are not. Acting like Bob Ross, I created an easel of the sauces on my plate to paint happy little wings with. They were all decent, but nothing stood out. All in all, some good middle of the road wings but if you want spicy or uniquely flavored, move along little doggy.

After plowing through our wings, Brooke brought out 3 “Fish bowls,” 1 for each table. This is a massive fruity mixed alcoholic beverage literally served in a fish bowl with a multitude of straws, usually intended for speed drinking. Since the premise of a Wing-Off is a challenge from the get go, we had no problem accepting Brooke’s idea of the tables racing. My table won!

Well Brooke, you wanted to make the blog and you did. Hope you’re happy. 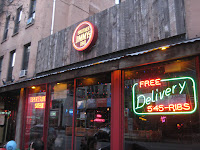 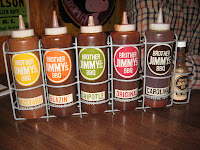 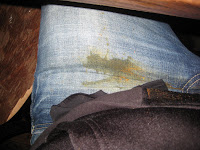 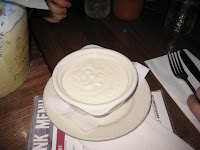 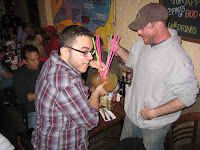 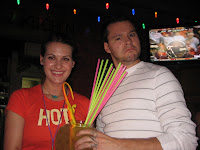 THE BACK PAGE SPORTS BAR 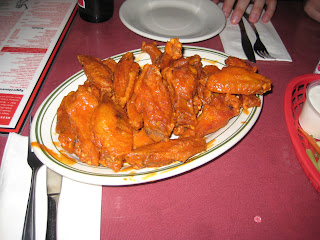 Generally a Wing-Off is between 2 locations only and even though eating at 3 different wing places sounds “awesome,” believe me, the 3rd one is difficult, even if it’s the beloved Lansdowne Road. It is tough to organize these things and with The Back Page Sports Bar not only having a reputation for great wings but only a few blocks away, we had to do the right wing. (See what I did there?!?!)

The restaurant was kind of empty which seemed a little odd for an Upper East Side Sports bar on a college football game day but hey, all the better for the Wing-Off crew. While the place was kind of vibe-less and sterile, the wait staff were attentive and quick. With no delay, we ordered up some Medium and Hot Wings as well as a round of beers.

The wings were good. Right amount of meat, right temperature, juicy, buttery, peppered and with a an appropriate amount of heat. This is a decent wing. We tore through them really quickly and placed an order of Extra Hot wings. They arrived without much delay and despite everyone feeling bloated and full, we tore through them. Same wings, but honestly, not that much hotter. 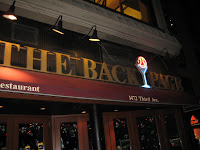 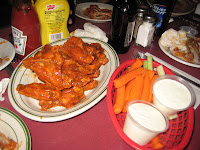 Honestly, not a bad wing in the bunch but someone has to win. This date in particular was chosen to celebrate a Happy Burgerthday to Wing-Offer’s Kyle and Schap! 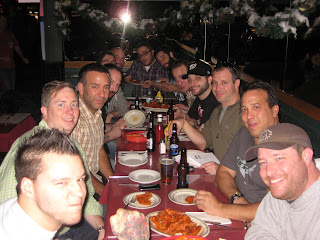