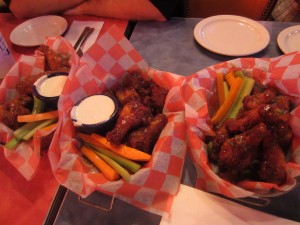 Duke’s has been serving up some of the most popular casual and comfort food in NYC since 1995. Both of their locations are now a popular place to watch sports, hang with friends, brunch or just relax. The restaurant is known for Sandwiches, BBQ, Mac-N-Cheese, fun, boozy drinks like Hurricanes, or their famous “Duke-A-Rita,” and most notably, as we are concerned, Hot Wings. All the tasty food is the brain work of Chef Michael “Sheffy” Siry. Not only can “Sheffy” claim a victory on the popular Food Network show “Chopped” but most importantly to this story, his Wings took the top spot at both the 2010 and 2011 NYC Wingfest.

With Wing excitement at an all time high, we placed an order for 1 of each kind of Wing that Duke’s serves:

There’s nothing more gross than rubbery Wings or ones that have little to no meat and are just fried to a crisp, to make up for a lack of meat. Duke’s Wings are totally the opposite! Their Wings are REALLY meaty and juicy. They also have an excellent breading. In fact, I’d venture to compare the breading to that of a great piece of Fried Chicken or hand made Buttermilk Chicken Tenders. Each of the sauces were really good but the big stand out was for all of us were the Honey BBQ Wings. It’s a rich and tasty mix of sweet, tangy and hot with a nice flavor of Black Pepper that pulls it all together. It’s the tasty kind of Wing that you could, and will, take down a couple dozen of in one sitting. We begged for another order along with a 2nd helping of the XXX which were hot although not painful. Chef Mike hand served us every Wing himself, excited to see our reaction. It’s abundantly clear that this guy is really passionate about the food Duke’s serves.

It was clear as we left, each with a bottle of the Honey BBQ sauce, that this was not going to be an easy call. 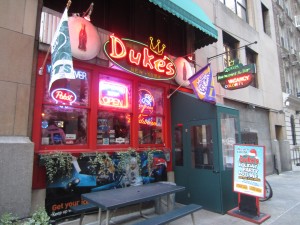 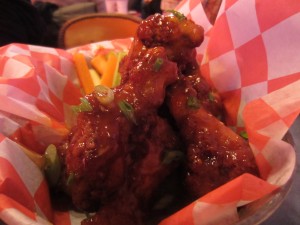 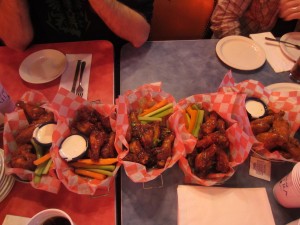 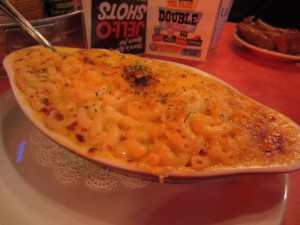 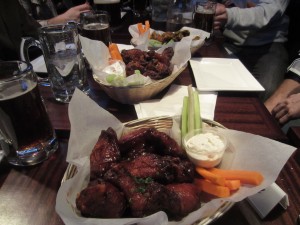 It’s obvious that the people behind SNAP Sports Bar LOVE watching sports at bars. Their attention to detail in designing a sports lovers lodge shows in the statutes of famous sports figures, the raised wall paper depicting classic American sports, the leather bound banquette’s with football stitching and the copious amount of flat screen TVs. The SNAP menu is a focused offering of Sandwiches, Salads, Burgers, Sliders and you know what’s next, Hot Wings!

Listed in order of spice, we took on a basket of each of the Wing flavors available at SNAP Sports Bar:

All of the Wings at SNAP are big and hearty with a lot of meat. It’s a clear sign that these guys are serious about their Wings. The sauce list was pretty unique and had the Wing-Off crew pretty anxious to dig in. The Hawaiian’s were sweet and tangy made with a Pineapple BBQ sauce. Also of unique note were the Peanut Curry, which leaned more on the Peanut side than Curry. The big moment of the day happened when the first of us bit into one of Koy’s Killer Sauce Wings. These hot, little fire crackers are not to be for the faint of heart, weak of tongue, small children, the elderly or anyone who hasn’t taken on the fair share of spicy foods or showed up to SNAP in shoulder pads or some kind of protective armor. OK, maybe they aren’t THAT hot but they certainly pack a serious MF’n punch. What makes this one stand out from the pack is not only it’s heat but also a great flavor. An aspect that is often over looked when Chef’s are trying to heat up the scoville’s on a Wing. It took out two of our guys while the rest of us had to go in on a 2nd order.

The Koy’s Killer Sauce Wing alone is enough to put SNAP on the NYC Wing map. 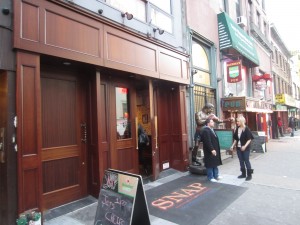 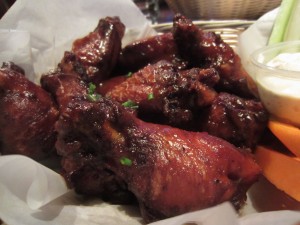 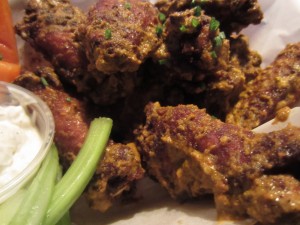 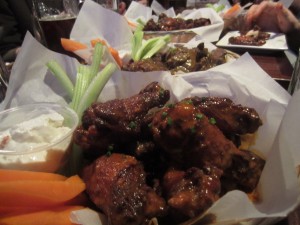 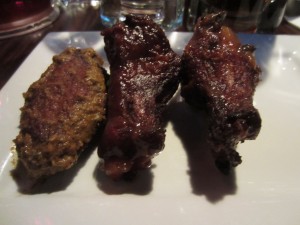 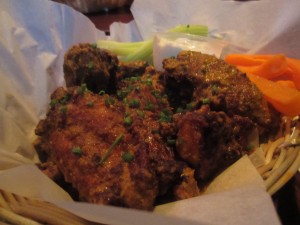 After many a tasty Wing, it was time for the vote to happen. 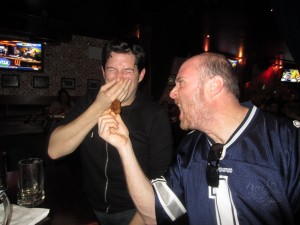 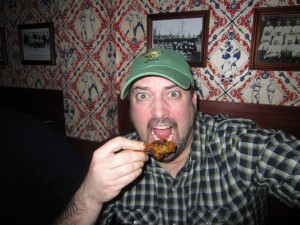 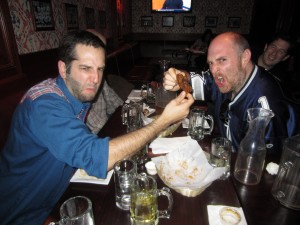 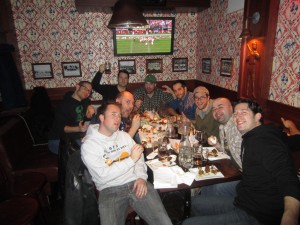 WING-OFF 17 OFFICIAL WINNER – DUKE’S!
I feel like I say it every time and you know what, it’s true when we do, this was NO easy contest to judge. First off, we aren’t just going to any old place that happens to be serving Hot Wings, we are eating at places known for their Wings. We are pitting the best against the best and for the Wing-Off to continue, a winner has to be chosen. To be honest, the Koy’s Killer Sauce Wing almost hands down won it for SNAP Sports Bar, whose Wings in general were fantastic. However in the end, it was flavor-ability in each of the diverse sauce of Chef Sheffy Hot Wings at Duke’s that helped them barely scrape by to victory in this competition.